Khao Lak is by far the most common place where our Similan Islands diving liveaboards are based. Most of the boats dock and sail from Tab Lamu Pier, in Khao Lak, too. This is the main seaside town that is home to many dive centres for Similan liveaboard diving as well as the daytrip boats. Khao Lak’s location makes it the nearest point of mainland to the Similan Islands. This ensures the quickest and smoothest journeys from land out to the best diving areas in Thailand.

Read More about liveaboards Based in Khao lak

Diving in the Similan Islands is best enjoyed on a liveaboard diving boat, but some people prefer to stay in a hotel or resort and just go day trip diving. For both day trips and Similan liveaboards, Khao Lak is the best, and most popular, place for each scuba diving journey to begin and end. Therefore, most of our diving centre partners are based in Khao Lak, and keep their boats their throughout the season – when they’re not out at sea, of course. While most people know Phuket well, Khao Lak isn’t as famous, and this works in its favour. Actually, Khao Lak is a very pleasant seaside town that has something to keep almost every tourist happy, including those who aren’t interested in scuba diving. Diving boats and dive centres being based in Khao Lak is better for both the local businesses and the tourists who come to dive at The Similan Islands. The benefits are mainly financial, but also include convenience and logistics.

Financial benefits of being based in Khao Lak

Customers benefit financially: Most things in Khao Lak are cheaper than they are in Phuket. This is mainly because Phuket receives so many new tourists every day that they are unaware of what things should really cost, and the local people are happy to exploit this innocence. Cheaper things include public transportation, Thai massage, food & beverages and most shopping items. Phuket is known to be controlled by certain groups of local people (sometimes referred to as the Phuket mafia) who decide on a fixed price for a service or goods, and discourage retail suppliers from undercutting that price. Prices are artificially high in Phuket, but this is less so in Khao Lak. It is also easier to get accommodation for a better price in Khao Lak than it is in most of Phuket’s tourist areas. One way that Phuket is maybe cheaper than Khao Lak is public transport from the airport. Phuket airport is located in the north of the island, and the time and distance from there to Patong Beach (south Phuket) is similar to going north to Khao Lak. However, there is a good choice of meter taxis and public shared minivans from the airport to places around Phuket. This isn’t the same for Khao Lak. It’s possible to come to Khao Lak by public bus, but not easy. The only other option is a private taxi, and they don’t put their meters on.

Dive businesses prefer Khao Lak: Due to the extremely high rental fees for land in Phuket, Khao Lak is a better option for businesses. They are able to rent larger plots of land for less money and this enables them to give both a better choice and service to the customers, but also pass on the savings by offering lower-priced Similan liveaboard diving trips. Also, with the boats not having to travel as far as those which go to Phuket, money is saved on fuel. Even if they have to transport guests, staff or equipment to Phuket for any reason, it’s cheaper to do this by road, and the Khao Lak-Phuket road is brand new, fast and smooth.

Dive tourists need to maximise convenience when on vacation: Holidays are all about relaxing, or doing something that is fun without wasting time. Enough time is already spent doing nothing much at airports and on planes. Once you have landed, getting to your hotel, resort or onto the boat can’t happen soon enough. With most boats sailing from Khao Lak, it makes sense for the divers to go directly to Khao Lak before boarding, rather than travel south from Phuket airport to beach areas such as Patong, Karon & Kata. Also, there is no traffic on the road from the airport to Khao Lak, whereas in Phuket the traffic can be horrendous, especially around Patong. It’s much more convenient for everything to be based in Khao Lak than in Phuket. Diving tourists can land at Phuket airport, come north to Khao Lak, and then there’s more time to organise logistics, and a delayed departure (even until midnight or a little later) doesn’t affect the diving schedule that starts early the next morning.

Logistics for dive centres are better is based in Khao Lak

Similan liveaboard diving boats, and the daytrip speedboats, prefer to be based in Khao Lak because the logistics are better than being based anywhere else. Tab Lamu Pier is 12 kilometres from central Khao Lak, where most of the dive centres are located. There is plenty of space at the pier for both boats to moor and for vehicles to move around and park. And even if guests or staff have to walk from a van to a boat, it’s a very short walk. Getting customers, diving equipment, and provisions from a Khao Lak dive centre to a boat at Tab Lamu Pier is easier than from anywhere else. And if there are customers who need collecting from Phuket, it’s still logistically better to bring them to Khao Lak for departure in the evening. As for the boats’ travelling distances, Khao Lak is the nearest point of land to the Similans, so although departures are planned for the evening (9-10pm), if they’re delayed until after midnight it doesn’t affect the next day’s diving itinerary, because the boats can still arrive at the Similans in about 4 hours from Tab Lamu. And as for them coming back from the Similans to Khao Lak, it is easy after 2 or 3 morning dives on the final day to still get everyone back to their local hotels before dinner. Boats returning to Phuket would need to leave the Similan Islands early 9fewer dives) or get back late. But boats returning to Khao Lak enable the dive centres to offer guests diving and an early return to land on the final day.

Average Rating 9.0/10 Based on 510 Diver Reviews for Liveaboards - Khao Lak

queenie
Chinese
Review score: 9/10
Dived: 27 Jan 2023
the crew is very nice, the diving was great with diversity, food on the boat was super delicious also, I will come back for sure!!!! A special thanks ...

Sam
Netherlander
Review score: 9/10
Dived: 26 Jan 2023
Wow what an amazing experience, really nice people and everything is cared for! To top it all of, those dives sides, incredible. Would recommend, I di...

Charles
American
Review score: 8/10
Dived: 26 Jan 2023
You will not find better service on a dive boat any were in world, and I have dove all over the world. If you are far from the boat when you come up t... 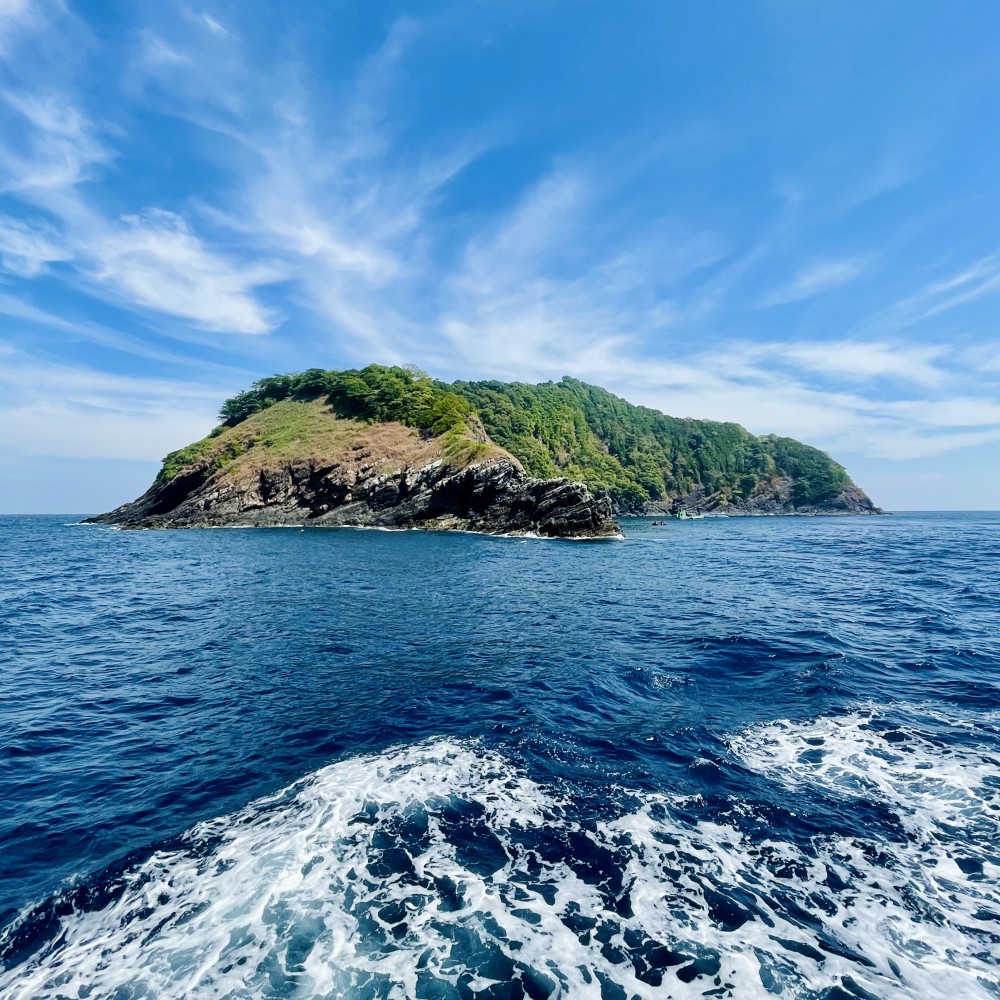 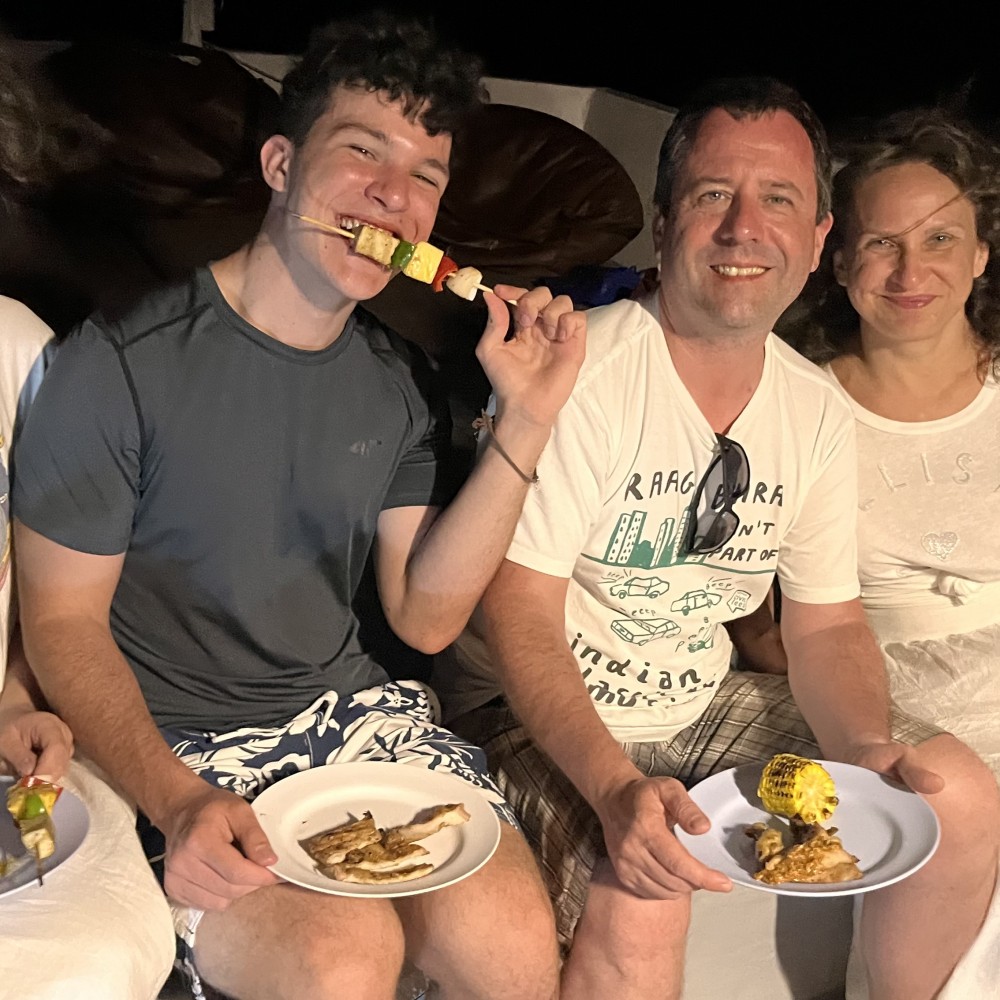 Maciek
Polish
Review score: 8/10
Dived: 17 Jan 2023
The trip was well organized. The best part was extraordinary dive master. Food was delicious and in varieties also for vege. Dive and boat service was... 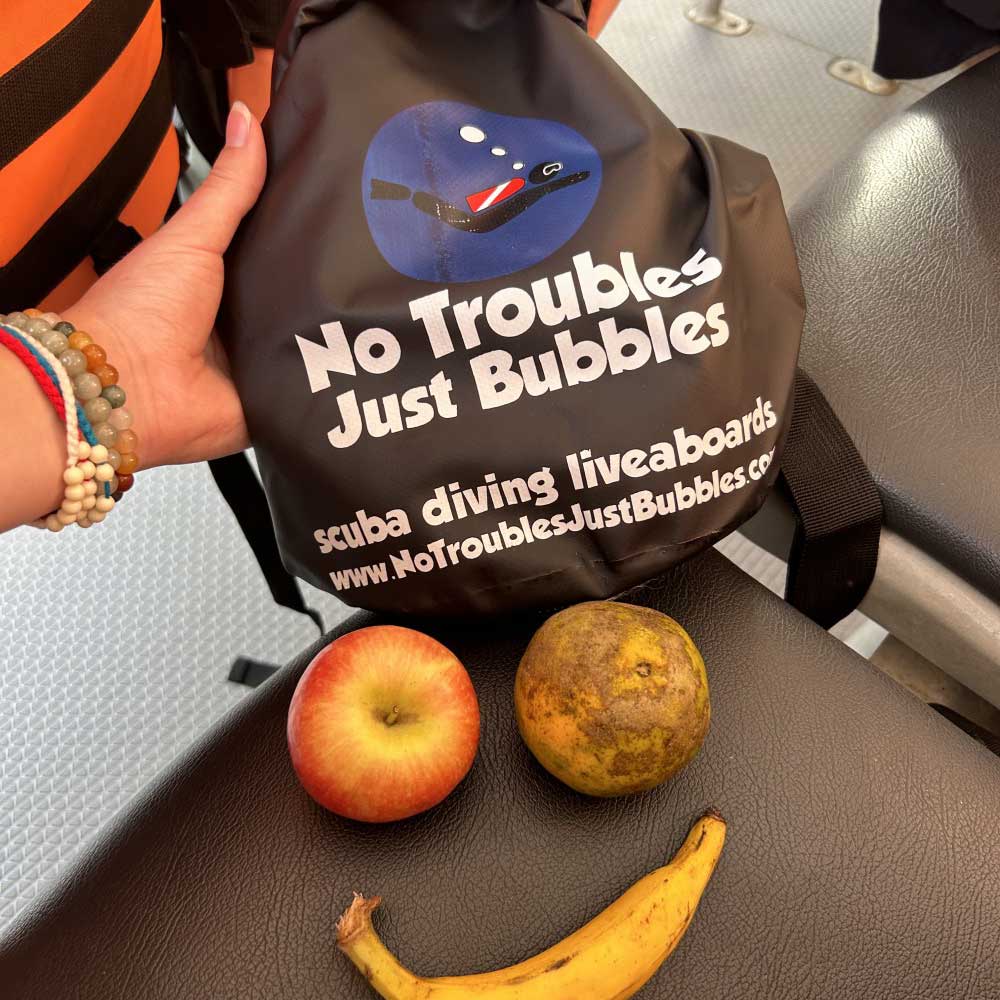 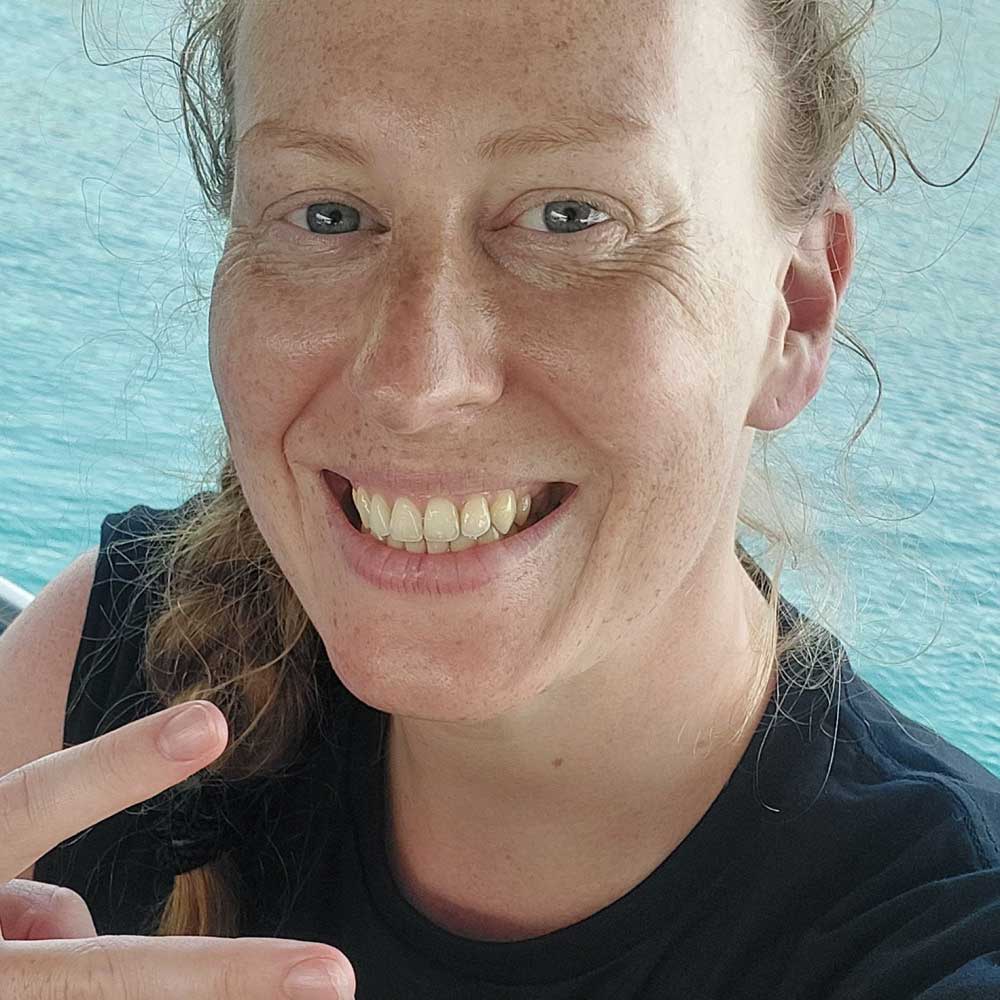 Crystel
Dutch
Review score: 10/10
Dived: 14 Jan 2023
Amazing experience, the whole team was there to ensure you had a great time, from gear you up, scuba diving itself, get your gear clean and refreshed ... 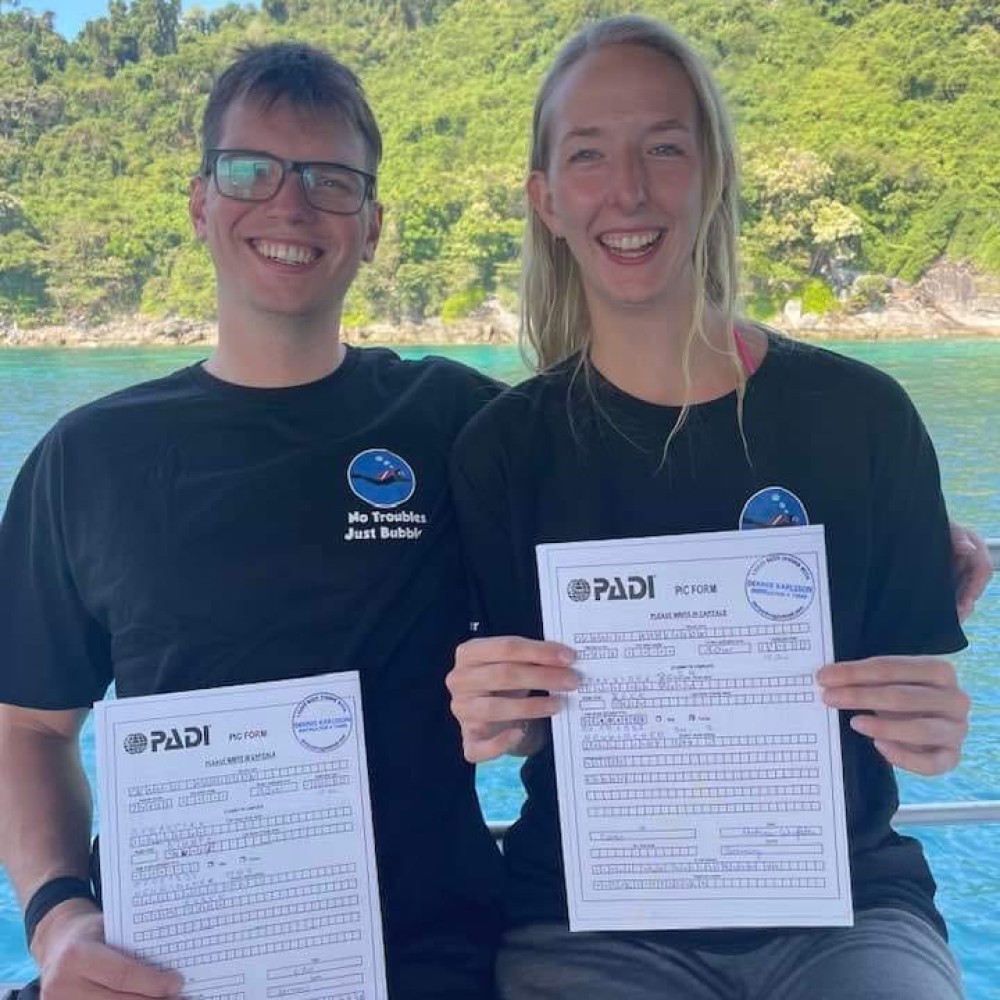 Sebastian
German
Review score: 10/10
Dived: 10 Jan 2023
Our trip with the mv Camic was fantastic. Jamie from notroublesjustbubbles did a great job in planning and was always available for questions about tr...

Franziska
German
Review score: 10/10
Dived: 10 Jan 2023
It was a great stay on the Camic. The crew and dive guides are very attentive and make an effort and are always up for a good time. Since it is a comp...
See all reviews from divers