MV Camic is a very popular Similan Island liveaboard boat. For the past few seasons, it was used as a 'flexible boat' which guests are transferred to by speedboat in the mornings and stay as long as they like. But for 2019 onwards Camic will run regular scheduled cruises that depart in the evenings and everyone on board starts & finishes the trips together and at the same time. Camic starts most trips at The Similan Islands, before moving north to Koh Bon, Koh Tachai & Richelieu Rock. During the 'Green Season' when the Similan National Marine Park is closed, Camic offers trips to Koh Lipe, departing from Pak Bara and with transfers from Hat Yai airport. MV Camic is among the most highly-regarded and popular scuba diving liveaboard diving boats which sails around the Similan Islands and the northern dive sites. There are two cabin options to choose from. These are double en suite & twin-bunk en suite. All are air-conditioned and clean. The boat's staff and crew are both experienced and professional, and the food is possibly the tastiest on any of the boats at the Similans, at any price. Camic's team includes some very experienced multi-lingual instructors, and we nearly always get very good feedback from our Camic guests. Now Camic runs scheduled (not flexible) trips that are 4D/5N to the Similans during high season.

Please note that some websites show the trips as 5D/4N to make you think you're getting a better deal, but this is incorrect and misleading. Do not trust websites that try to mislead you or are out of date. With Camic you get four full diving days and five nights in your cabin. You join in the evening, and leave in the morning.

In addition to great-value trips, including the free transfers and great food, MV Camic is among the least expensive liveaboard boats on which to take part in a PADI course, such as Advanced Open Water. Courses are taught by PADI instructors in a selection of languages.

MV Camic is a popular Similan liveaboard boat, on which groups of people can spend evenings chatting together while enjoying the views, the weather and each other's company. In the past, Camic has been criticised by some people for having too many day trip divers join, but the boat no longer runs that type of trip. That means that from October 2018, Camic guests & crew start and finish each Similan diving cruise together.

Not only is MV Camic a great-value and easy Similans liveaboard to do fun dives from, it is also one of the best and least expensive to take part in a PADI diving course while on board. There is a wide range of diving courses that can be completed while you enjoy cruising around the crystal-clear waters of the Similan and Surin Islands. The unbeatable prices are inclusive of materials and certification.

Please note that the dives are not ‘extra to the cruise.’ They are part of the dives which make up the trip, but you will be taught by a qualified and experienced PADI instructor for that many of your Camic liveaboard cruise dives.

The itinerary below is a general guide of what to expect on Camic’s trips.

Exact pickup times depend on how many guests need to be collected and from where. Departure time is planned for 9.00pm.

The Similan trips are 4D/5N 15 dives. Do not trust or believe a website that tells you 5D/4N. These websites are either out of date or misleading you to look better value.

The itineraries below are the most-common for each trip, but these can sometimes be changed for a number of reasons. Small changes are made due to weather & sea conditions, special marine life sightings, overcrowded dive sites, local-authorities' instructions, and the needs & requests of the paying guests. The safety & comfort of all guests is most important at all times.

Click on an itinerary below for detailed information
Transfers

At the end of the trips, guests are transferred to local hotels or the nearest airport.

For customers who would like a private taxi please see below for details.

(Click below for a rough guide to the rates you can expect to pay ‘per vehicle,’ not ‘per person’.)

MV Camic is the ideal scuba diving liveaboard for chartered diving trips in Thailand. It is run by an experienced, friendly and professional crew, especially the locally-famous chefs who serve lots of delicious meals several times every day. The boat is an ideal size to ensure friendly & sociable trips, but still offer space & privacy for couples, friends and solo divers. Most trips are 4D/4N or 5D/5N to The Similan Islands & Richelieu Rock, but with enough forward planning it's possible to have a shorter or longer trip, or visit the southern islands of Koh Haa & Hin Daeng.

There are three master cabins on Camic, two on the upper deck and one on the main deck. Also on the main deck are four twin-bunk cabins, which are all en suite. If your group is larger than 14, or you need more than seven cabins, there is also one more twin-bunk cabin that uses shared bathroom facilities. The communal dining and social-gathering area is on the upper deck, and offers great views, a sea breeze and shelter. Sun worshippers can go further up to the top deck to enjoy a partially-shaded roof which is perfect for chilling, sunbathing or gazing at the star-filled night skies.

7 Reasons to Book with us:

The booking process for MV Camic is very simple & convenient. Firstly, ask us to reserve a space in the cabin of your on the date/trip that you would like to join. We are happy to do this for free, and without any commitment from you. When you are ready to confirm, we ask for 25% of the cruise price as a deposit. This payment is most-commonly made via PayPal,with no added fees for using your card. You don't even need a Paypal account, although PayPal do encourage you to open one. The PayPal invoice can be sent to any email address and payment can be made by anyone.
But nowadays a direct bank transfer is becoming very popular. We have accounts in USD, EUR, GBP, AUD, NAD & THB, and paying this way ensures you get the very best rate and often no fees at all.

The 75% balance is due one month before the trip. And extras such as park fees, dive insurance, and any equipment rental and/or courses can be paid when you arrive in Khao Lak. Card payments attract 3% bank fees. There is an ATM near the dive centre and several banks in Khao Lak.

Cancellation fees depend on the time and reason for cancelling. Please contact us for details. The management of MV Camic are both considerate & flexible whenever possible regarding customer cancellations.

Late cancellations usually cause the customer to forfeit their paid deposit, which Similan Diving Tours pass on to the boat's owners. However, we try to avoid having to do this and always refund as much as we can to customers who have to cancel. MV Camic is owned and run by a small, local and experienced team, so the policies are more friendly and flexible than some others.

Most travel insurance policies can protect you from unforeseen cancellation penalties.

or fill out the form below

Read real reviews from people who have dived with MV Camic 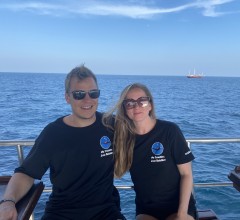 Hannah
Divers Nationality: British
Boat rating: 10/10
Amazing trip. Our first liveaboard so we wanted a small group. The Camic was perfect. All of the staff including the boat boys, kitchen staff and dive team were so friendly and wonderful to be around. They catered for my dietary requirement very well . Our dive guide Toun was great and explained everything/ answered any questions we had. ...read more

Joe
Divers Nationality: British
Boat rating: 10/10
The trip was amazing. Great value for money. All the staff on the boat were extremely friendly and Jamie was a massive help with everything, he even helped us find dive watches the day before our trip.

Karin Raab
Divers Nationality: British
Boat rating: 10/10
Had the most wonderful 4 days aboard Camic - it was just fabulous. Denis was amazing , not only did he manage to get me through advanced , he laughed and encouraged us the whole time - the most delightful crew , always spot and helpful We had a gre at group of fellow divers . It was an unforgettable trip. Loved it !! ...read more 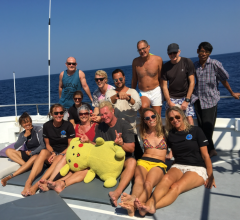 Tanya
Divers Nationality: British
Boat rating: 10/10
Fantastic! My first time on a livaboard and an awesome experience! A really great way to do some intensive diving. The staff and crew were helpful and friendly, the instructors were calm,experienced and knowledgable. I felt completely comfortable in their hands, especially considering I hadnt done much diving over the years. The aquatic life was phenomenal and I will treasure the memories forever! If you are a keen diver this is a must! ...read more

Ann
Divers Nationality: British
Boat rating: 9/10
Fab dive trip on the Camic with Denis and Tik. The Similan islands never disappoint even after 20+ years! Saw a baby whale shark and narrowly missed a much larger one which another group did see. Will be coming back soon... 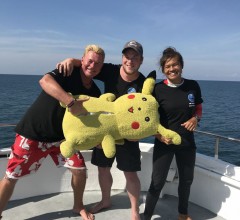 Pim
Divers Nationality: Dutch
Boat rating: 8/10
It was truly amazing!! Thanks Jamie, Dennis, Tik and the rest of the Camic team!!! After Jamie arranged a nice live aboard for me last year, I knew who to contact this year.. After some advise and tips from Jamie I picked my 5D5N live aboard. The MV Camic departed in the evening. The next morning it was time for our first dive with dive guides Dennis and Tik. The enthusiasm of them and knowledge about the dive sites made the trip both, exciting and interesting. The Thai boat crew was very helpful with getting in and out the water with every dive. In between the dives the cooks did a great job in serving a variety of nice food. About the diving itself: the Andaman Sea is beautiful anyhow, but this year I am happy to say I saw manta’s for the first time in my life. At Koh Bon two of them passed by several times. What an experience!! Impressive???????? Is there something to complain about as well? Beside a toilet that did not flush that well and a lack of freshly brewed coffee, no. And to be honest this was compensated well by all other positive experiences. Once again, Thanks Dennis, Tik, Camic crew and Jamie for this amazing trip! ...read more 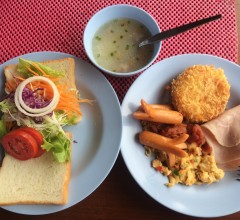 Guillaume
Divers Nationality: Swiss
Boat rating: 10/10
An awesome trip surrounded by professionals and fun instructors. We opted for the 3 days live aboard, next time we will stay longer! Our instructors were Michiel, Jumbo, and Ronaldo, all brilliants, and adapted to our beginner level!

hin
Divers Nationality: Hong Kongese
Boat rating: 8/10
this trip is my first dive trip out of hong kong _ i got a really good Experience... thank you all the instructor and boat crew

For all liveaboard guests
FREE T-shirt

& Wristband
For All Our Liveaboard Guests